This is the second video in the Live from New Orleans series on the musicians of the Jackson Square Allstars.  Kenneth Terry lives and breathes New Orleans.  He rose up out of the mud of the Mississippi River and now the sound of the city flows through him and out of his trumpet.
Posted by MJWB at 06:16 No comments:


I am fortunate that the musicians in Jackson Square, New Orleans have taken me in as one of their own. We perform as the Jackson Square Allstars just about every day. All of the guys have lived extraordinary lives, and those lives continue to sculpt them into the incredibly unique and contoured characters that they are. Mark "Tuba" Smith is one of these men. He allowed me to follow him around for an entire day and I managed to whittle the reams of footage down to under ten minutes. Enjoy!
Posted by MJWB at 21:34 No comments:

I wound up at my very first accordion community event a couple weeks ago through a fantastic, last minute series of events. (email me if you want the entire story) I attended the Florida Accordion Association's 10th Annual Smash! in Orlando, FL and took a bunch of video. Here are some of my faves:
Aldo Mencaccini was bouncing around the Smash event like a nineteen year old. He came to America in 1937 and soon became a master technician at the legendary Excelsior accordion company. He went on to found the Bell Accordion Co. He is one of America’s most experienced accordion builders, designers, and master technicians.
For me, Dick was one of the best players at Smash. He was so busy listening and enjoying everyone else that he hardly played at all. I had to beg him to play a few tunes for the video. This one is Midnight Sun by Lionel Hampton and Sonny Burke. Click -here- for video of Dick playing All the Things You Are
I think Jerry played the most out of any person at the Smash event. Wherever you looked, Jerry was playing. He knows over two thousand songs. Raúl is a great player from Cuba. We played a bunch at my friend Hector's dealer booth. Hector has just started the Miami Accordion Club and has a lot of classic accordions. This performance was a revelation for me. Cotton Fields Back Home was written by American folk and blues musician Lead Belly. To my great surprise I learned that the first instrument he played was accordion. 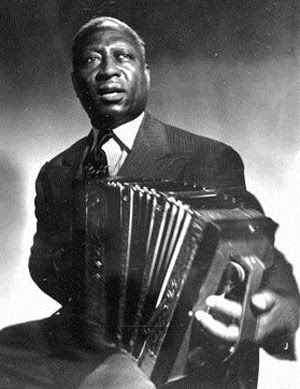 Lead Belly and his "windjammer"
Posted by MJWB at 07:00 No comments: